This Episode Sponsored By:
90-Day Product Goal Framework
Are you tired of failing to meet long term goals as a product creator? Now there’s a system to help keep you on track and on task as you launch your own products – more details 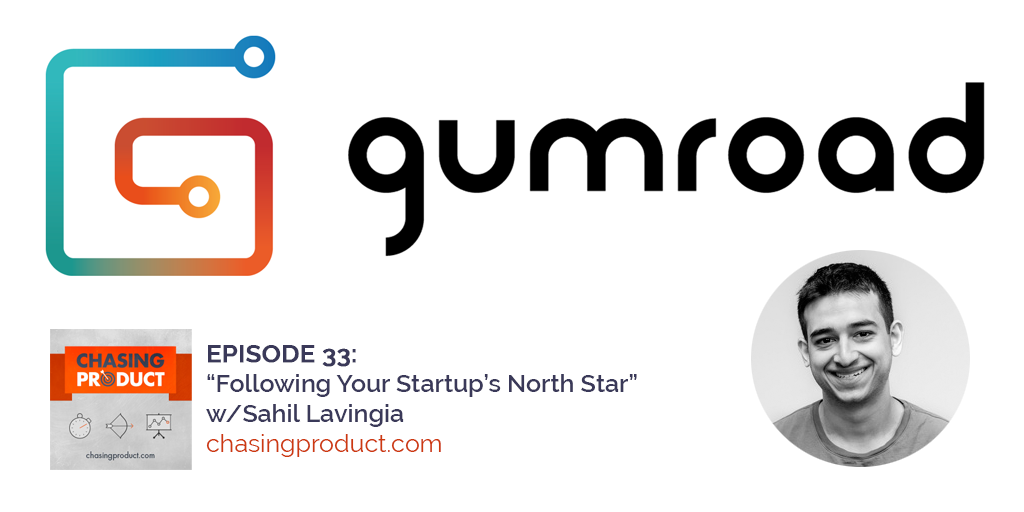 In this episode, Gumroad founder Sahil Lavingia opens up about VC, recent layoffs, the bright future of the company, and how having a startup “north star” has helped him to find his way as a founder.

Sahil lavingia has had an interesting ride. Getting into the game as a teen doing self-taught freelance logo design, Sahil moved on to ad banners, web design, app design and eventually app development to meet market demand as brochure sites became less and less desireable.

The connections he made led him to landing a job at Pinterest in 2011 (which was not “the” Pinterest we know today). Being an early employee at a funded startup taught Sahil a number of valuable skills, including:

During that formative time at Pinterest, Sahil came to understand the concept of a startup “north star” – core values that vet every decision a founder makes. Sahils own north star led him to launch a startup of his own, Gumroad. After coding up a proof of concept consisting of a hew hundred lines of code/html/css, the next indicated step was to turn it into a business that scales well.

Being plugged into the Valley startup ecosystem, Sahil discovered that there was a system & process for turning ideas into money. After securing $1mm in seed funding, Sahil proceeded to behave like a bootstrapped startup, building out Gumroad on his own for an extended period of time and letting most of the money sit in the bank. The decision to take funding was guided by Sahil’s startup north star to help creators be able to earn a living from selling their creations.

“My default answer is, yes, I totally can.”

In recent years, that same startup north star led Gumroad away from further VC and back to being a bootstrapped business. Sahil talks frankly with me about his experience with VC – which he says has been very positive – and what recent layoffs mean for the company.

We also talk about how his startup north star led the development of a high degree of automation at Gumroad, why the Gumroad team continues to roll out new features, and why the company never needed more than a few employees to handle the day-to-day operations of the startup. Sahil further tells us how his startup north star will guide him through the decisions facing Gumroad as they continue to operate as a bootstrapped company for the foreseeable future.

“People like saying you’re either bootstrapped or VC-funded, and I don’t think it’s that binary…it’s a spectrum.”

We also talk frankly about what VCs expect from their portfolio businesses, and why this works out acceptably well for Sahil and Gumroad, according to his startup north star.

Mike Taber of AuditShark shares his tale of building a software business while on the road as a consultant.  We talk about life as a consultant and a founder, the random nature of hits, and some common behaviors of successful bootstrappers.

Mike is an interesting dude.  He was successful at building a software business while still being a consultant, and he’s done it alone.  Because of my strong aversion to partnering up, seeing a success story like the one Mike has is very important to me.  Through it all, he has been able to distill what he has learned in such a way that it makes sense when he explains it.

We touch on Mike’s history as a consultant and founder, discuss some examples of success that doesn’t look like you expect it to, and even share a brutally honest moment with Mike as he recounts watching his business crater when the economy got rough.  This last moment is particularly interesting; it’s rare for a founder to be so honest about the ugly side of running a business.

Ready for more talk about bootstrapping? Brian Casel joins us for the 4th episode.  We talk about Brian’s experience developing and releasing 2 Saas apps (and more!). We also get to cover some practical aspects of keeping on track through a bootstrapped product launch. As if that weren’t enough, Brian and I also cover some good nuts-and-bolts material regarding software product marketing & design, planning your work, and more.

Brian also shares 3 concrete action items that he recommends to aspiring bootstrappers looking to move measurably closer to their own bootstrapped product launch (and dovetail with your software product marketing needs).

Speaking as an aspiring bootstrapper, I found Brian’s interview answers really valuable.  In particular, Brian’s dedication to planning his goals out ahead of time really speaks to me.  This is a practice I already use with my consulting projects, and for some odd reason I haven’t fully applied this practice to my product endeavors.  Have you?

This is Chasing Product, the podcast helping freelancers and consultants transition from client work to launching bootstrapped software products.

If you want to get out of client work and in to product work, then you are Chasing Product.